At 7:00 pm on March 30 of 2000, Chump Change – Fame, Fortune, Cheese and Beer was screened at the Orpheum Theater on State Street. Shot in 35mm film, this 90-minute film would prove to be the start of something great.

Though the Wisconsin Film Festival (WFF) is approaching its 21st year, one of the most innovative sections of the Festival, Wisconsin’s Own, will celebrate its 20th birthday this coming April.

Intended to celebrate the cinematic work and creativity of Wisconsin, films in this portion of the Festival all have some close tie to the state, from original film soundtracks written by Wisconsinites to films being directed or produced by someone from or in the state.

While it’s only fitting that the first ever Wisconsin’s Own film embraced two of the state’s pride and joys – beer and cheese – this portion of the Festival is just as comprehensive as the Festival in its entirety. With a section specifically for student filmmakers from or attending school in the state, Wisconsin’s Own ensures that incredible filmmakers, professional or not, are represented at the Festival.

“It’s a great step towards building a filmmaking community in Wisconsin. That is something that needs to be built from the ground up,” said James Runde, whose film Played Out will screen as part of Wisconsin’s Own at the 2019 Festival. “There’s just not a lot of independent filmmakers in Wisconsin. If you’re a filmmaker in Wisconsin this is one of the premiere places to connect with people who are doing the same thing as you.”

“This film, embarrassingly, took three years,” laughed Runde. “It started when I got out of college and I didn’t have enough money to make a real feature film. I had a few shorts in the Festival but felt like I really wanted to take that next step. This is the film that taught me to make films.”

Arielle Bordow, a junior at UW who works under Runde in the Department of Communication Arts, also has a film in the Wisconsin’s Own section in this year’s Festival. As Runde is also a good friend, Bordow is thrilled to have her short film 140 N Hancock screen right before Played Out.

“Last year, our shorts also played together in the Festival, but it’s really cool to see how we’ve both grown over the year,” said Bordow. “James is a great filmmaker and I look up to him and his work.”

Majoring in Communication Arts (Radio, TV and Film) and Sociology, Bordow was inspired to create 140 N. Hancock by Comedy Central’s Broad City, a show which follows the lives of two hilarious women navigating their 20’s in New York City.

“I really like the idea of finding the moments of humor in the mundane and I also wanted to capture what it’s like to be a goofy early twenty-something living in Madison in 2019,” she said. “My whole cast and crew are UW students or alum, and the film takes place on the east side. This film wouldn’t be the same film outside of Madison.”

Runde, who grew up in Madison, also believes his film will resonate with those living in the city, referring to it as his “love letter to Madison.” This film, which takes an extremely personal look at the lives of three different families close to Runde, took courage to create and release to the public. But that courage and three years of work paid off as Played Out is one of this year’s Golden Badger Award winners.

The Golden Badger Awards recognize excellence in Wisconsin’s Own films, and Runde is one of three winners in 2019, alongside Todd McGrain’s Elephant Path and Bill Brown’s Life on the Mississippi. 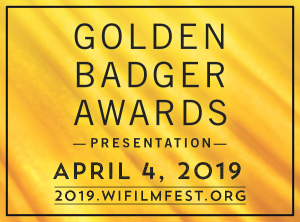 Bordow and Runde’s films will screen on Saturday, April 6 at 6:15 pm in the Marquee at Union South, along with Lost Cause, a student film by Joe Schwaba.

The 2019 Wisconsin Film Festival takes place from April 4-11 in Madison. For a list of screenings, film descriptions, and to purchase tickets, visit 2019.wifilmfest.org.